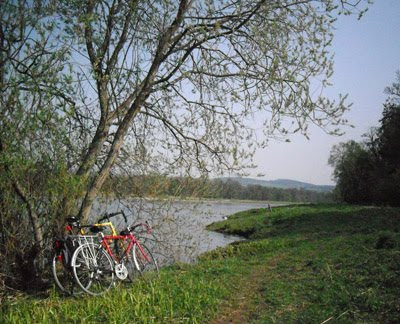 Last Sunday we had glorious weather here in Perth (like everywhere else in the country I imagine) so myself and the other half got the bikes out and had a run up the Tay and Almond, via popping into his work at Inveralmond. On the way back to Perth we stopped off along the river opposite Scone Palace, plonked ourselves on the grass and shared a bottle of Ossian in the sun. Bliss! And then he asked me to marry him. Which was a bit of a shock.----------------------------------- 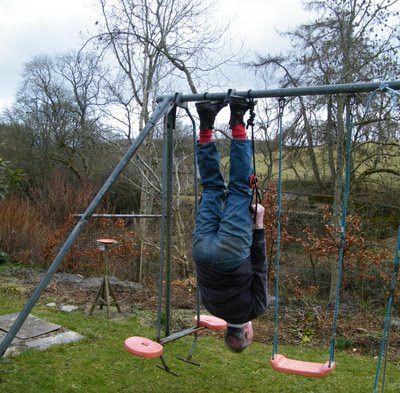 ---------------------------------- the man in question
Now, we've been together 8 years now so some may say 'what took you so long?' but half of us has never really hankered after marriage and the other has been there before in a past life in another land so any reference to marriage has only ever been discussed with the prefix 'hypothetically in a parallel universe.....'
So after initial bewilderment, followed by much giggling, quacking of ducks and a little wetness around the eyes, I found myself saying a big old yes. The 'ring' was a beautiful brooch by Sarah Spalding that I had been admiring a couple of days before at the re-opening of the Tayberry Gallery.
But don't worry, I won't be filling this blog with wedding(y) things, for aswell as not having the shoes, clothes & make-up genes, I seem to be missing the wedding one too. We'll just try to keep it as simple as possible and get there in our own way at some time. But here are some old photos I dug out at home..... 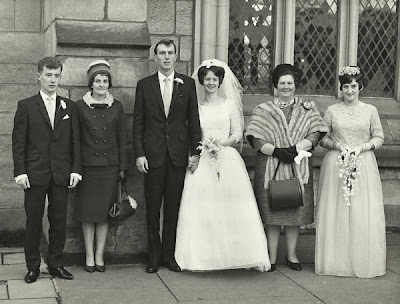 My parents wedding in the 60s, flanked by my Gran Irvine on the left and my Gran Uist on the right (both grandpas absent, Grandpa Uist because he and my gran would take it in turn to leave the croft to go to their 6 daughters' weddings, can't remember where Grandpa Irvine was). Strangely enough they got married in Perth, even though neither had any connection with here, and had their wedding 'do' on the same street as boo vake is now. 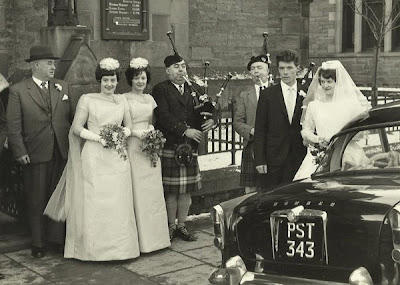 My aunt & uncle's weding (also in Perth I think) with my mum (on right) and her twin sister as bridesmaids. Grandpa Uist's turn, that's him looking dapper in the hat. I think the pipers are great uncles.
Posted by boo vake at 12:54

Email ThisBlogThis!Share to TwitterShare to FacebookShare to Pinterest
Labels: other stuff

Congratulations Arlene. I'm sure there's a wee wedding gene in there somewhere and before you know it you will be prancing aroung in a flouncy confection of frills and lace. I've still got my wedding dress and bridesmaid dress (from my sisters wedding) in a box under the bed and my daughter and I played dressing up with them quite recently.. Scared the life out my husband.
By the way did you name your grans for where they lived? I had a granny Auchinleck and granny Coylton and everybody thought me and my sister were mad but we just called them by their villages rather than their names.
Fionax

Thank you both!
Fiona - I'm a bit worried now! And yes, grandparents were named after where they came from. Got the same reaction from others but made perfect sense to us. Glad you concur!x

Congratulations! What a wonderful way to be asked! Couldn't have asked for a better setting!

Cheers Ceri - thought I'd got it past you! x